At 04.15 in the morning of 9th april 1940 German troops crossed the Dano-German border in Southern Jutland. At the same time German troops were landed by ship in Gedser, Korsør and Copenhagen.

After short fightings in Southern Jutland and German demonstration flights over Copenhagen with bombers, the Danish government at 06.00 decided to end the fighting. Fightuing had cost 16 Danish and 2-3 German lives. 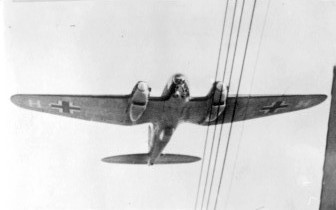 A German bomber, Heinkel He 111, passing the town of Aabenraa at low in the morning of 9th April 1940.