Following the orders of Hitler, the Supreme Command of the German Navy decided to put up a heavy coastal battery by Hanstholm. The battery was intended to strengthen the defence of the entrance to Skagerrak. On 9th October a reconnaissance unit was in Hanstholm to point out the position for the new battery. Construction of the bunker began in the beginning of November 1940 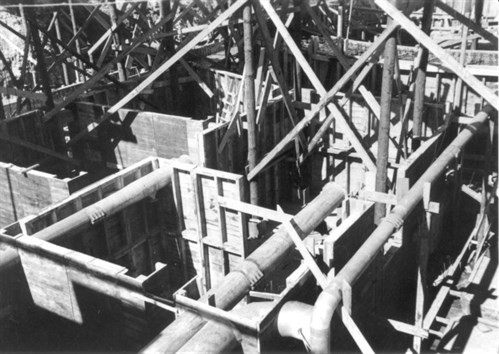 The formwork for the machine room of one of the bunkers for 38 cm gun, spring 1941

Digging the foundations and pouring the concrete for each bunker took about four months. A subsequent two to three months were required to actually install the different equipment. The bunker covered about 2,500 sq m, and some 6,560 cubic metres of concrete were used in its construction. A bunker of this size could naturally not be poured in a single operation, so the bunker was constructed in eight independent sections. Work on the four bunkers was staggered somewhat, so that workers and equipment could be moved on as the work progressed. 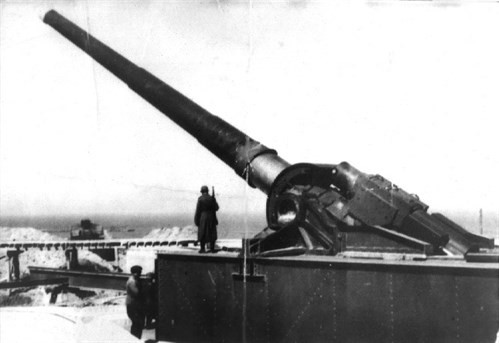 38 cm gun mounted on the substructure of the gunturret.
The mounting of the armour has not begun yet,  spring/summer 1941.

By May 1941, enough of the construction work had been completed to allow the first two guns (number 3 and 4) to be test-fired. The last two guns were test-fired on 28 August, 1941. 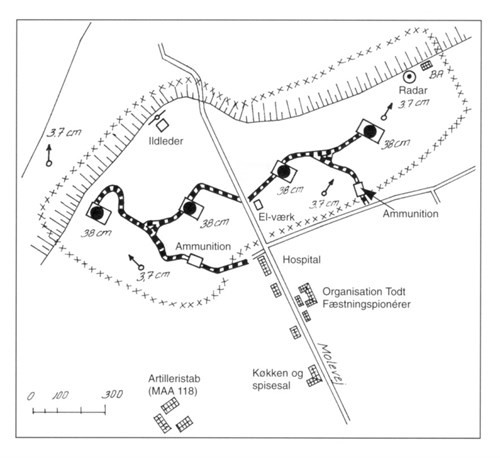 Plan of the lay out of the heavy battery "Hanstholm II" as of October 1941.
All buildings shown on the plan were connected to the battery.

In addition to the bunkers described above, a fire control bunker in two storeys, two large ammunition bunkers and a central powerhouse bunker were built in 1941. The ammunition bunkers and the gun emplacements were connected by a system of narrow rails for transport of the heavy ammunition.  Moreover, four large brick buildings were erected along the west side of the Molevej road. These housed a hospital, workshops and a kitchen.

Starting in 1942, a number of new bunkers were built to reinforce the battery’s close-range defence. In 1943–44, four large ammunition bunkers were constructed. With their 3.5-metre-thick walls, these were the most strongly built facilities in Hanstholm. The battery had a crew, which numbered 600 men.