The evacuation of civilians from Hansted The increased fear of invasion and the “West Wall Order” of December 1941 had serious consequences for the inhabitants of Hanstholm. The Germans saw the 38 cm battery as especially threatened. The result was a German demand for evacuation of civilians in June 1942. Furthermore, the Germans demanded that the work on the harbour should be stopped. The reason for this was that the harbour was of no military interest.

The German demand was based on fear of  siege. They were able to feed their own troops but they did not want to feed the civilian population. The German commander considered to forcebly remove the inhabitants – if possible!

The Danish authorities tried to limit the extent of the forced evacuation. But on 25 November, 1942 a government order calling for the complete evacuation of Hansted was issued. The deadline for completion af the evacuation was 15 February, 1943. In order to speed up the proces cash rewards were given to families who moved out quickly.

Rehousing of the population
Due to lack of housing in the area the State built camps to house those who could not find any other place to live. Camps were built at different sites around the district. A small one with appr. 20 huts were set up by Nytorp, just eastwards from Hanstholm, and a larger camp consisting of 60 huts was built by Ræhr, appr. 5 km east of Hanstholm. In Hirtshals about 30 huts were built for those fishing families who decided to move to that place. 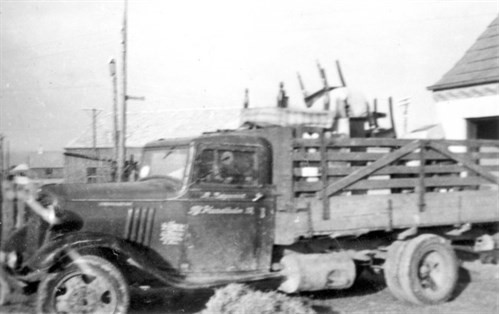 January 1943: Furniture is being loaded on to carts, which will soon move off to the huts in the camp at Ræhr. 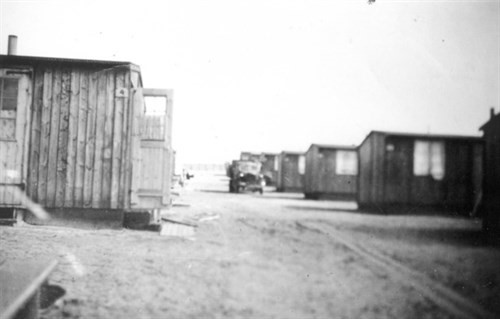 View down one of the "main streets" in the camp set up at Ræhr for the people evacuated from Hansted.

A relaxed moment in the camp at Ræhr.

The camps had to be built quickly. Due to this they were far from ready when the people of Hanstholm moved in. In the camp at Ræhr, for example, there was only one tap for all the occupants, and no electricity. What was worse, the construction of the huts was very poor. Furthermore, the huts were badly designed. An example: The toilet was placed just outside the kitchen, separated from it only by a wall of thin and gaping planks. In addition, the huts were small; the largest of them only measured 8 x 4 m, and contained a living room, bedroom and kitchen. These huts were meant to house a whole family, so that even by contemporary standards people had very little room.

The huts stood only a few metres apart, which meant that privacy was an unknown luxury in the camps. On the other hand, the cramped conditions and the fact that all were in the same boat created a feeling of solidarity and the basis for a sense of community more tangible than the people of Hanstholm had experienced when they each lived in their own houses in Hansted.

Permission for the population to return was not given until 1 June, 1946. About 25 houses and 3 farms had been pulled down by the Germans. The remaining houses had not been looked after. They bore the traces of wear and tear – and vandalism. Only about 500 of the original 800 inhabitants returned. 300 had put down their roots elsewhere.