The guns of battery “Hanstholm II” had the name 38 cm S.K.C/34. They were completely modern guns, which were developed to be fitted onto German warships of the "Bismarck" class. 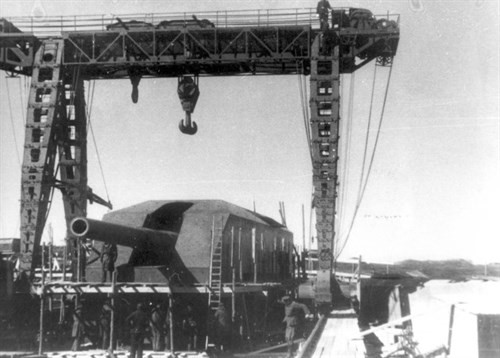 Finished gun turret, summer 1941. The massive gantry cran, which could lift up to 150 tonnes, is still in place
above the turret. (Marineschule Mürwik).

The guns were produced by Krupp, Essen. The guns in Hanstholm bore the numbers of production 70, 71, 74 and 75 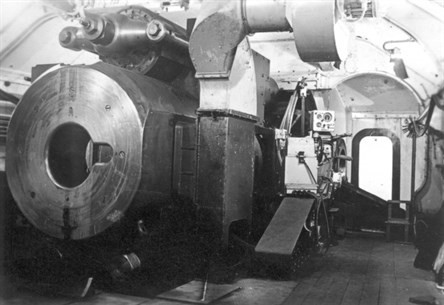 Section drawing of a 38-cm gun turet in the gun pit.

The gun barrels alone weighed 110 tonnes, and were nearly 20 metres long. The naval guns were delivered without turrets; instead they were set up in land turrets, Bettungsschiesgerüst C/39, which were both cheaper and simpler than those fitted to ships. In principle, the land turret was a large armoured shed, that housed the rear end of the gun with the breach and loading gear. The turret itself weighed 540 tons.

The turrets and the gun wells were covered with camouflage nets fastened to a frame work of iron rods. 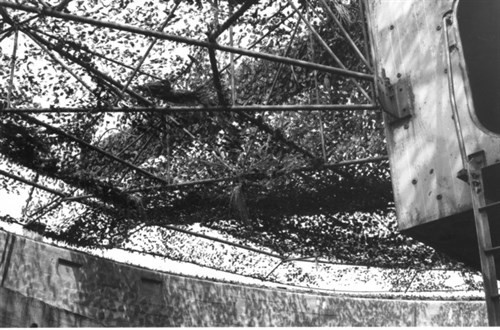 Gun turret seen from the gun pit. The Framework for the camouflage nets is clearly seen.

Unlike gun turrets mounted on ships, land turrets did not cover the entire firing pit. This made the large firing pit vulnerable to bombardments, especially from the air. In addition, the turret’s armour was only 5 cm thick, so it only protected the gun and gunners against shrapnel and small arms fire. On ships turrets, guns of the same type had armour plating as much as 36 cm thick.
An electric motor was used to adjust the guns traverse and range, though in an emergency this could be done by hand. Loading, on the other hand, was manual and called for a team of 12 strong men. 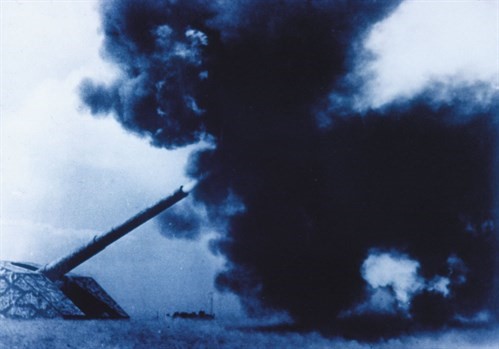 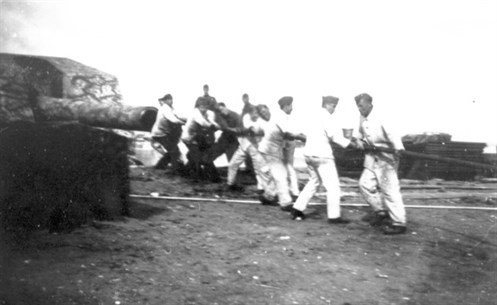 The standard shells weighed 800 kg, but could only be fired as far as 42 km. To achieve the maximum range of 55 km, a lighter 495 kg shell was used. It took these shells just over two minutes to travel their maximum range. The guns were able to fire a shot every 90 seconds.

From time to time practice firings took place using narrower practice barrels, which were placed inside the large gun barrel and took 12,7 cm shells. This procedure was used to save the highly expensive main gun barrels, which were subject to wear every time they were fired; the inner lining of the barrels had to be renewed after approx. 286 shots. 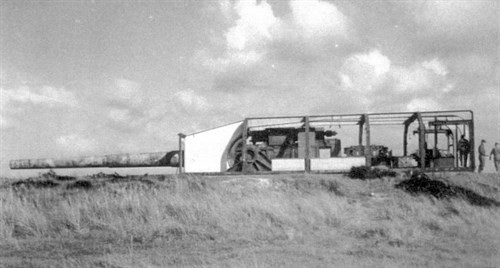 Turret with 38 cm gun, Autumn 1951. The armour plates are being dismantled.
The following year the gun and it's carriage was scrapped.