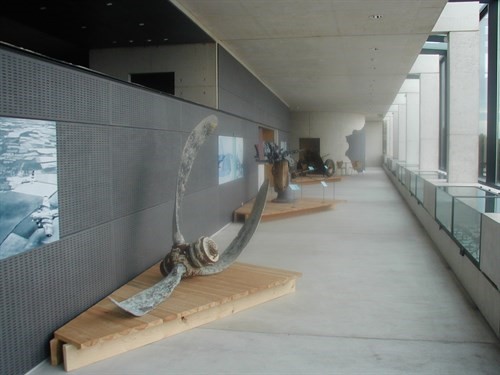 Propeller from an American bomber, the Boeing B-17G "Flying Fortress". The plane weighed nearly 30 tons and could carry a load of up to 8,000 kg of bombs. The name "Flying Fortress" refers to the fact that the plane was armed with 13 machine guns.

This propeller belonged to a bomber that was shot down by the anti-aircraft artillery at Hanstholm on 22 February 1944. The bomber had participated in a raid on Ålborg and was flying over Hanstholm at an altitude of 6,000 metres on its way back to a base in England. 117 heavy (7,5 and 10,5 cm) shells were fired at the plane from Hanstholm, and one of its engines was damaged. The pilot tried to fly the plane back to England, but he had to give up after 15 minutes and try an emergency landing at sea. None of the crew of 10 survived the crash. German war diary.

The propeller was caught in a fishing net some 80 nautical miles west of Hanstholm in 1996.