The bunker housed a type of mortar, which was a designed for fortification. The M 19 was an automatic 5 cm mortar, which could fire up to 120 grenades per minute and had a maximum range of 750 m.
The mortar stood under the 25 cm thick armoured copula, the surface of which is in ground level, so it was hard to make out and to destroy. The concept was that the mortar should cooperate with machine guns to defend the perimeter of the fortress. The mortar was supposed to lay its fire in areas which the machine guns couldn’t cover (depressions and revers side of hills), thus chasing soldiers out of cover, into the fire of the machineguns.
Apart from the mortar, the bunker housed the nine-man crew and ammunition for the mortar.
The bunker was built in 1943, and there are four bunkers of this type in Hanstholm. A restored specimen of the mortar can be seen in the museum.
The bunker is being used for art exhibitions. 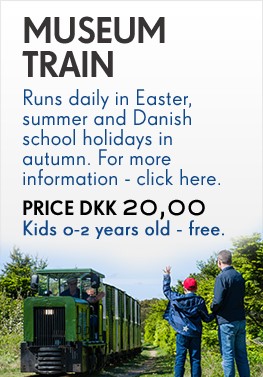