"Hudson" bomber O of 407. Squadron had taken off at 7.53 A.M. from the air field of Bircham Newton. With four other planes starting at the same time it was to patrol the North Sea for enemy shipping.

Lockheed Hudson belonging to the Royal Canadian Airforce. Originally, the "Hudson"-flyet was developed from a civilian airliner, but it proved to be effective for patrol over open sea. (Photo: Canadian Forces) 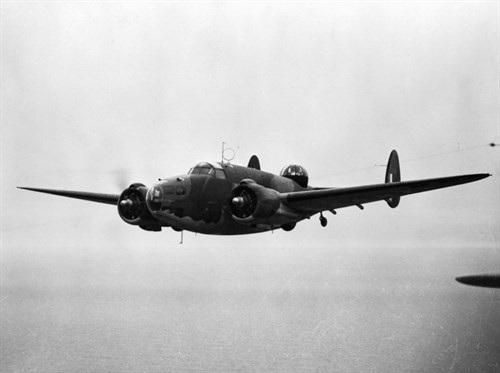 The plane closed on the Danish west coast at Hanstholm. Here it discovered a German patrol boat, Vorpostenboot 2009, which lay immediately under land, through the mist. At 10.47 AM the plane attacked and dropped four bombs, which, however, did not hit the patrol boat. 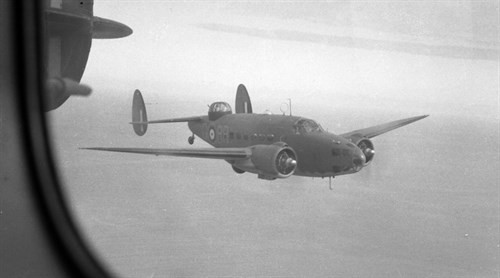 "Hudson" from the squadron as the one that was shot down at - 407. Squadron Royal Canadian Airforce. (Photo: Canadian Forces)

As the plane closed on land, the German anti-aircraft guns were ready to open fire on it, as the had been warned of its presence by their radar. The guns on the gun did not manage to fire more than six rounds before the plane again disappeared in the dim. The plane shot back, but it was so seriously damaged that it crashed close to the coast.

German 37 mm anti-aircraft gun (3,7 cm S.K.C/30) photografered on Hanstholm in 1945. A gun like this got the chance to fire three rounds at the "Hudson". (Photo: F.G. Tillisch/Museumscenter Hanstholm) 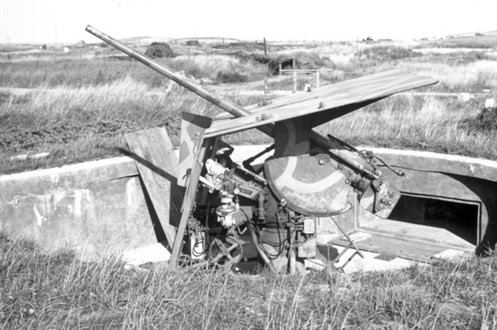 Both the patrol boat and the artillery on land claimed the honur of the shooting down.

The whole aircrew of four men were killed in the crash. Three of the airmen were found and buried in Frederikshavn, whereas the fourth man has no known grave.

Later, German soldiers salvaged a part of the rudder. The wreckage was used as a trophy by the German soldiers. On the rudder they wrote "Battr. Hansted 5. April 1942", and it was presumably used as decoration in one of the huts of the battery.

After the war, the rudder was brought to Germany - exactly when is not known. There it was used as decoration in a garden until c. 1990 - in the autum of 2004 it was brought back to Hanstholm.

Report of the anti-aircraft artillery, M.A.A. 118, on the shooting down

Report of Vorpostenboot 2009 on the shooting down